A recent report from the Centers for Disease Control (CDC) shows that there has been a 25% increase in suicides in the US since 1999.  Montana experienced about 29 suicides for every 100,000 people -- the highest in the nation.

“These data, derived from the National Violent Death Reporting System, showed that 54% of those who committed suicide in 2015 did not have a known mental health condition. Digging deeper, the researchers found that several circumstances, including the loss of (or problems in) a relationship, were more likely to trigger a suicide among those who did not have a mental health condition.”  Source:  CNN “US Suicides Increased More Than 25% since 1999, CDC Says” 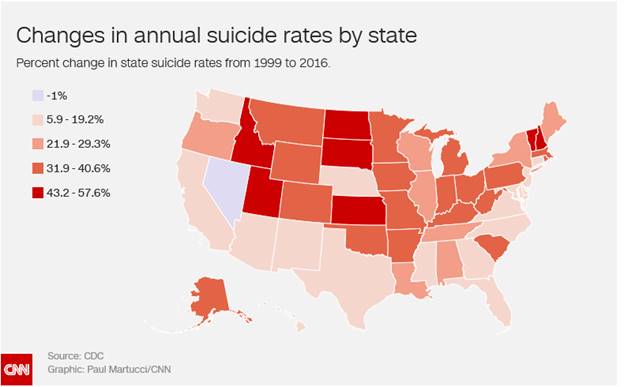 That being said, it’s important to understand that we can help prevent suicide.  By educating ourselves on possible risk factors and warning signs, being willing to have candid and compassionate conversations with our loved ones/friends/neighbors, and “staying with them”, both literally and figuratively, we can make a difference and save a life.

The American Foundation for Suicide Prevention has identified the following as possible warnings signs that a person is at risk for suicide:


Listen to What a Person Says:

If a person talks about:

What are Their Actions?
The following are some behaviors that may indicate risk, especially if related to a painful event, loss or change:

What is Their Mood?
A person at risk for suicide may display one or more of the following moods:

MentalHealth.gov provides a list of possible risk factors for suicide

Back to the Top